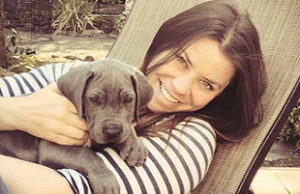 As the slide show plays, revealing a lovely bride with her groom, the reality sets in. The chestnut hair that frames the young and blissfully happy face knows the day she will die. And it’s in a matter of weeks. Brittany Maynard was diagnosed with an especially brutal brain cancer. Worse, she’s already in stage four. Her death will be excruciatingly painful for her. She will lose all body and cognitive function within months.

The young woman made the decision to take control of her life, or rather, to take the control away from the cancer that will ultimately kill her. She, her husband, her mother and her stepfather have moved to Oregon, where she can legally take her own life without fear of her family feeling the legal repercussions. Oregon is one of just four states that allow these decisions to be made.

Meanwhile, Jay Castaño visits Congressional Cemetery where he plans to be buried in a shroud. Unlike Maynard, he doesn’t know what day he will die, but he’s determined to ensure it’s as natural as possible. He is part of the “green movement”, a group who say it’s time to get back to the natural aspect of dying in order to better protect the living. Within a few days following his death, his friends and family will gather in Washington and put his unembalmed body straight into the Earth. “I want to be wrapped in a shroud like a little burrito,” says Castaño. “They can call it a Chipotle funeral. They can wrap me up and throw me there and cover me up with some grass and soil.”

The 65-year-old has completed his estate planning efforts and included in his last will and testament that whenever he does pass, he intends to become part of the “green burial” movement. He wants to eliminate what he says are the “trappings of the modern funeral industry”. That’s his primary goal, but he also says it’s an overly expensive process that shouldn’t be, “I am a tightwad. Those fancy caskets don’t come cheap.”

He’s not alone. As more baby boomers continue to move toward retirement, they’re far more aware of what happens to their physical bodies after death. While there are still those who want to throw a big party as they leave the world, for others, it’s about simplicity, a brief moment of pause and then a green burial. They’re thinking different, but less – not more. In fact, some cemeteries are even digging graves by hand to keep the carbon footprint minimized. They’re also opting for natural stones found along any river bed versus expensive headstones.

For Maynard, she too wanted to have control over how she lived her final days – and how she left this world. Putting together the legalities – the contracts associated with her decision to end her life, including already having the two pills she will take on November 1, along with her estate planning, which no doubt includes a living will and other medical powers of attorney, she will die just as she lived – surrounded by those she loves most and who love her dearly. Despite her certainty with this being the right decision, it couldn’t have been an easy one. She’s gone public in hopes that more states will consider laws that make it legal for others to make their decisions in how their final days will be lived.

To learn more about estate planning as part of your overall efforts, contact our offices today. Our legal advocates will work with you to ensure you’re empowered and that your final wishes will be honored.