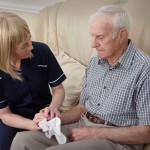 Dementia is very common among our nation’s elders. Though there are other causes of dementia, the leading culprit is Alzheimer’s disease.

Alzheimer’s disease is surprisingly widespread. A good source of information about Alzheimer’s is the Alzheimer’s Association website. According to their research, one out of every eight seniors citizens is an Alzheimer’s sufferer.

This is a significant figure, but the likelihood of contracting Alzheimer’s increases as you get older. Over 40 percent of the oldest old (those 85 years of age and older) are suffering from Alzheimer’s disease.

If you were to experience Alzheimer’s induced dementia, you may require full-time residence in a nursing home at some point in time.

Nursing home costs are exorbitant by any barometer. Genworth Financial has conducted an in-depth study into the current state of long-term care costs. According to their research, the median annual cost for a private room in a nursing home in the state of Ohio in 2013 was $82,125. A semi private room averaged just under $75,000 annually.

Most people will qualify for Medicare when they reach the age of 65. You earn eligibility for Medicare by accumulating retirement credits while you are paying taxes on your income.

Medicare will not pay for a stay in a nursing home. This is considered to be custodial care rather than medical or convalescent care.

Medicaid is a government health insurance program that will pay for long-term care. However, Medicaid is only available to people with significant financial need. In spite of this, many people who were never poor ultimately qualify for Medicaid as elders.  This is typically accomplished through a Medicaid spend-down.

The term is more or less self-explanatory: you spend or give away your resources until you have virtually nothing left in your own name. Then you can qualify for Medicaid.

Spending down can be an effective strategy, but you have to be aware of the five year look back. You are penalized and your eligibility is delayed if you divest yourself of assets within five years of applying for Medicaid coverage.

If you were to recognize early dementia signs in yourself or in someone that you love, you may want to discuss Medicaid planning with a licensed elder law attorney.

Earlier in this post we provided statistics that were provided by the Alzheimer’s Association. There is a section of their website that is devoted to Alzheimer’s symptoms. You may want to visit this area of the site so that you can recognize warning signs when and if you see them.